Truth seems like fiction and fiction seems like fact in this unusual film. In Communist Romania of the 1980s, “Dallas” was the only glimpse of Western life allowed by the government, which hoped that the show would teach people how phony and deceptive capitalism is. But the people, including Livia Ungur, took something else from “Dallas”. They fell in love with the Ewing family, dreamed of being just as rich, and when “Bobby” died, they went into mourning. Years after the Iron Curtain fell, Ungur returns to her childhood haunts with Patrick Duffy, who is stepping back into the character’s shoes in a Romanian hotel, built as an exact replica of the TV ranch. With Duffy participating in the nostalgic fantasy, they move between reality and imagination, between true confessions and delusions. 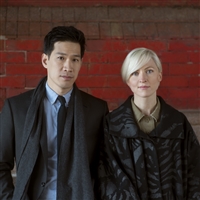 Ungur & Huang is a wife-and-husband artist duo, based in New York City. They make films, sculptures, installations, and performances. Since 2015, they have exhibited works at the National Gallery of Art in D.C., the Stavros Niarchos Center in Greece, the National Library in Buenos Aires, the Black Maria Film Festival, Kassel Dokfest, and Stuttgarter Filmwinter. “Hotel Dallas” is their first
feature film.

Livia Ungur (b.1979) was born in communist Romania; she immigrated to America to study art, graduating from the Yale School of Art in 2015.

Sherng-Lee Huang (b.1979) was born and raised in Tennessee. He learned filmmaking while making comedy videos for his YouTube channel, Quiet Library. He Named me Malala