Avraham and Shraga are identical twins who remained in their Brooklyn home after their parents died. The problem is that they let things go until stacks and piles of household items and garbage almost block the windows. When a lively cleaning crew infiltrates the vermin-infested home, the two elderly, ultra-Orthodox men are forced to confront the issues that led them to live that way in the first place. Despite their age, education, sense of humor, and respectable appearance (including the mandatory beard and pot belly), the two men act almost like children, seeking ways to escape the dramatic changes that will make their home a welcoming place again. 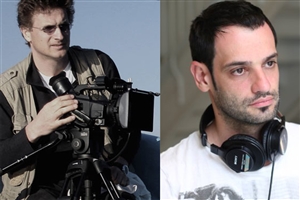 Antonio Tibaldi has written and directed 5 features films. As a documentarian Antonio has an on-going collaboration with UNTV (United Nations TV).
Alex Lora is a Spanish filmmaker based in New York City who has screened twice at Sundance Film Festival as Official Selection.