Gush Etzion Junction, between Jerusalem and Hevron: Ali Abu Awwad dedicates his family’s field as a Palestinian Center for Non-violence. Despite his life experience, four years in an Israeli prison, his mother’s five year sentence, a brother killed by an Israeli soldier- Ali creates “Roots” with local Israeli settlers, advancing responsibility and grassroots work to enable political reconciliation. The director, a resident of Gush Etzion, accompanies the initiative for 2.5 years and documents the changes transpiring on both sides. In 2015, Etzion Junction suffers a wave of violence and the activists face a reality where their own relatives are being attacked. 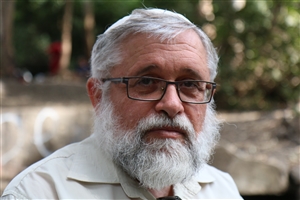 Rabbi Mordechai Vardi (56) the head of the screenwriting at the "MAALE" Film School. He graduated Master's degree, in Tel Aviv University. He is a rabbi of Kibutz Rosh Tsurim. He directed documentary films aired on Channel 2 & yes doco. The field is his third film.