At the beginning of 2017, Tzina Dizengoff square, one of Tel Aviv’s emblematic sites, has been demolished. The square was a home for the lonely and marginalized characters of the area. This project tells the story of the people who gravitated toward the square and spent their days in it, finding comfort in being alone, together. ‘Tzina: Symphony of Longing’ is an interactive VR project that invites the viewer to take a physical walk and explore the square and it characters at different times of the day, incorporating elements of animation, fantasy and interactive sound. 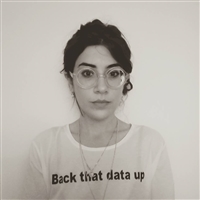 Shirin Anlen (1985) is an Interactive creator working at the intersection of documentary, video games and volumetric photography. Her focus is on the development of interactive and experimental documentary. Her work has exhibited internationally including IDFA DocLab, House of Electronic Basel, Museum of Moscow and Israeli Pavilion Festival de Cannes.