So many wonderfully magical scenes happen in these woods, making it easy to become addicted to the idea that they’re not real—a fairytale forest. Four years of filming (most of them spent hiding and lying in wait) produced rare, intimate scenes where animals—alone and in the company of other animals—behave as if unobserved. The camera follows deer, wolves, hedgehogs, owls, snakes and insects at close range, so close you can examine the texture of their fur, hear the fluttering of their feathers and get swept away into their complex world, filled with situations that might have been taken from a thriller or a soap opera. This voyeuristic, immersive journey has no commentary—it is accompanied only by growls, screeches, chirps and the rustling of leaves. 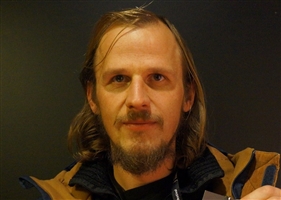 Trained as a biologist (Vilnius University), Mindaugas is successfully pursuing his career in documentary filmmaking (film directing and cinematography). In 2012 his film The Field of Magic (Stebuklų laukas) received the national Lithuanian cinema award Silver Crane for the best documentary feature. He has also been collaborating with well-known film directors: Šarūnas Bartas, Sergey Loznitsa, Audrius Stonys.