Titled in Hebrew, Hane’elam, the original film was intended to address a contentious subject in Israeli society and one of the military’s absolute taboos – the rising number of soldier suicides. The ambitious production was of a scope rarely seen in the local film industry at the time and included hundreds of soldier extras, an entire armored brigade, military helicopters and special operations personnel. With a lavish budget and a cast of leading Israeli actors and actresses, shooting commenced in multiple locations around the country, among them also a top secret missile base. Soon after editing began and preparations for its commercial, nation-wide distribution were underway, The Disappeared had disappeared. 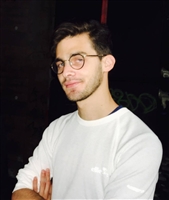 Gilad Baram (b. 1981), is a photographer, visual artist and documentary filmmaker. His work has been exhibited in various festivals, museums and galleries worldwide and won prizes and scholarships. After his award-winning directorial debut Koudelka Shooting Holy Land (2015, 72.min), The Disappeared is his second film.

Adam Kaplan (b. 1987) is an artist - a graduate of the Fine Arts department in Bezalel Academy. He has presented his work at various exhibitions and conferences, including Haus der Kulturen der Welt (Berlin), CCA Tel Aviv, Salt Galata (Istanbul), Hamidrasha - Hayarkon 19 (Tel Aviv) and CPH:DOX (Copenhagen).