THE VIEWING BOOTH explores a space ostensibly off-limits to cinema — the internal experience of the viewer. In a lab-like space, Maia Levy, a young American woman, watches videos portraying life in the West Bank city of Hebron, while verbalizing her thoughts and feelings in real time. An enthusiastic supporter of Israel, the images in the videos, disseminated for the most part by the Human Rights organization B’Tselem, contradict some of Maia’s deep-seated beliefs. Empathy; anger; embarrassment; innate biases and healthy curiosity — all play out before our eyes as we watch her watch the images created by the Occupation. As Maia navigates and negotiates the images, which threaten her worldview, she also reflects on the way she sees them. Her candid and immediate reactions form a one-of-a-kind cinematic testimony to the psychology of the viewer in the digital era. 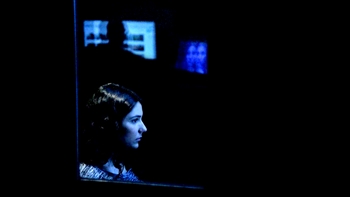 Director Ra'anan Alexandrowicz's is known for The Law in These Parts (2011), which won the Grand Jury Award at Sundance 2012 as well a Peabody award. His earlier documentaries The Inner Tour (2001) and Martin (1999) both played the Berlin Film Festival's Forum and MoMA's New Director New Films series.