Bruce Lee passed away at the peak of his career. After years of enduring prejudice, racism, discrimination, and countless roles that he and his fans deemed too small, he finally reached the top of Hollywood’s heap—only to die unexpectedly at 32. It happened days before the premiere of Enter the Dragon, which became his highest-grossing film.
Lee started acting at a young age and moved between the US and his family’s homeland, Hong Kong. He was anxious to prove himself as an actor who could do more than martial arts and determined to pave the way for other actors of Chinese descent. Shown through the eyes of his friends and colleagues (including Kareem Abdul-Jabbar), Lee’s story features a rare selection of scenes from his films, before and during his glory days. 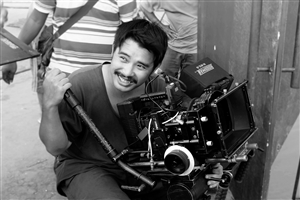 Bao Nguyen is a Vietnamese American filmmaker whose past work has been seen in the New York Times, HBO, NBC, Vice, ARTE, and PBS. He has directed, produced, and shot a number of short films, which have played internationally in numerous festivals and museums including MoMA and the Smithsonian.

He is a 2011 PBS/WGBH Producers Workshop Fellow and an alumnus of the 2012 and 2014 Berlinale Talent Campus. He earned his BA in Politics/International Relations at NYU and his MFA in Social Documentary Film at the School of Visual Arts in New York City. He is currently based in Saigon, Vietnam.