They spend their days training rigorously, trance-dancing, praying, and eating with a ritualistic intensity that requires them to lick their plates. At night, they hold each other close and have intimate conversations. The Master assembled this group of followers twenty years ago, and together, they withdrew from the world. Since then, they have been preparing to protect humanity from evil, when that evil comes.
Director Valentina Pedicini had previously made a short film about this sect. 11 years later, when she came back to their secluded mansion in Italy, they viewed her return as auspicious and gave her free access to their rituals, their time with their children, and even moments of crisis, of which there are many. Using black & white cinematography and a lot of music, she manages to capture the enthralling sense of absolute devotion that permeates the place.
With the support of the Italian Institute of Culture. 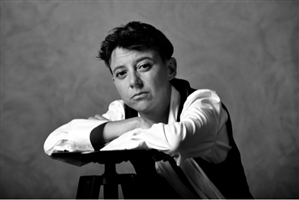 Valentina Pedicini graduated with honors in Direction from the Zelig International School of documentary film.
Her works during her school years, "Pater Noster", "Mio Sovversivo Amore" and "My Marlboro City" are selected in many national and international festivals.
In 2013 the documentary Dal Profondo won the Solinas Prize, the International Film Festival of Rome 2013. Winner Nastri D'Argento, the film is in the five David di Donatello Awards as Best Documentary.
In 2015 he shot his first fiction short film Era Ieri. The film is presented at the Venice International Film Festival 2015, International Critics' Week.
In 2016 he shot his first fiction feature film: "Dove Cadono Le Ombre", a Fandango and Rai Cinema production in Competition at the Venice Film Festival 2017, in the Venice Days section. Winner of the NuovoImaie Talent Award (Federica Rosellini), the film travels the world to tell an unknown tragedy. Faith is his new documentary (2019).