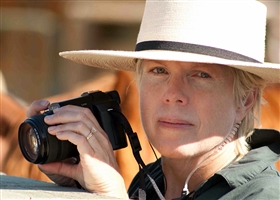 Cindy Meehl founded Cedar Creek Productions, LLC in 2008. The film company has traveled from North Carolina, on to Tacoma Washington, France, Wyoming, California, Montana and Texas to film the legendary Buck Brannaman. His exceptional and profound horsemanship skills drove Cindy to create her first documentary. She thought it was a story that had to be told and an inspirational message that would benefit people whether they had a horse or not.

Coming from a creative background in fashion and art, Cindy ran her own label Sasha, Cindy and Phil as well as Cindy Hughes Designs all through the eighties. She designed couture evening wear that sold across the country. Her clothes were in the window at Bergdorf Goodman and were featured in film and television as well as magazines and print campaigns . Cindy studied art at Marymount Manhattan College and the National Academy of Art in NYC. She began fine art painting in the 90's. She has now transferred her art from a canvas to a screen.

Cindy is currently in development on a new documentary project. She lives in Connecticut with her husband, writer Brian Meehl, 2 daughters, 4 dogs and 2 horses.