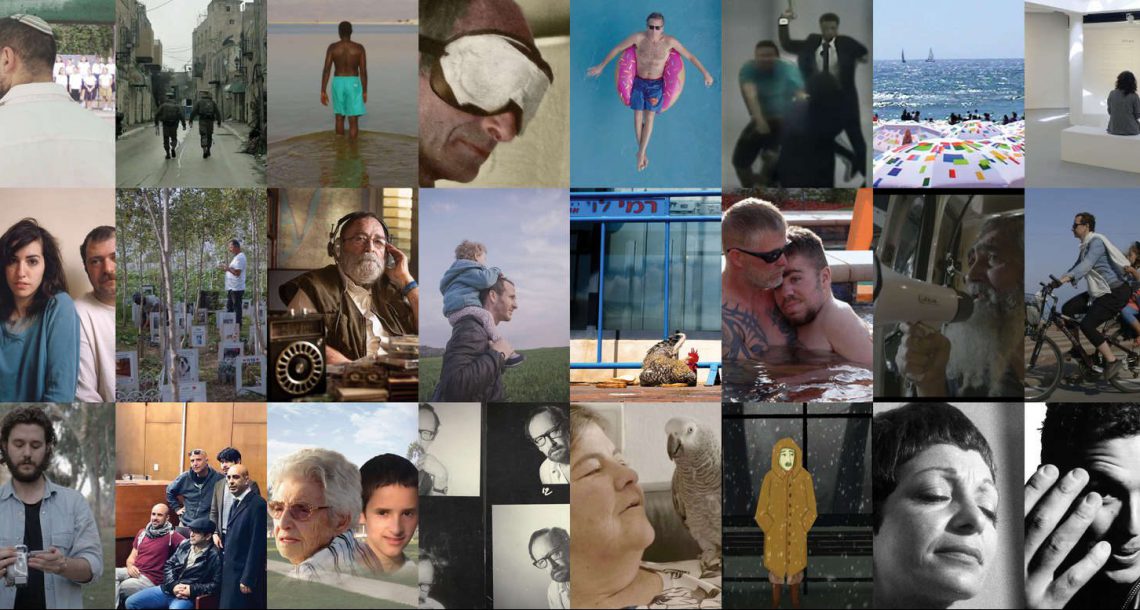 Approximately 120 new local and international documentaries will be screened at the festival, total prizes awarded to this year’s winners will amount to NIS 400,000

The 24th edition of Docaviv, Israel’s biggest celebration of documentary film and the only Israeli festival dedicated exclusively to documentary cinema, returns to the Tel Aviv Cinematheque, select venues around the city and online format on May 26 through June 5.

The winner of the Best Israeli Documentary award will receive a NIS 70,000 prize, with an additional grant of NIS 100,000 from Docaviv to be used toward promoting the winning film in preparation for the Academy Awards. This is the largest cash prize offered in Israel for documentary filmmaking. Other honors include the Mayor’s Award for Best Debut Film, Honorable Mention, the Yossi Kaufman Best Director Award, as well as the Editing, Cinematography, and Research awards.

A new award will be introduced at this year’s festival: The Kadar Foundation Award, granting a NIS 50,000 prize, for a documentary inspired by the history of Israel and Israeli society. The new award is presented by the Kadar Art, Culture, and Science Foundation, founded by Dr. Avraham Kadar. The winner will be chosen from the Israeli lineup

Israel 2022, 90 min, Hebrew and German
From an archive of over half a million negatives taken by Israel‘s most celebrated war photographer Micha Bar-Am, 1341 FRAMES OF LOVE AND WAR reveals an epic journey of self-doubt and questioning through the camera.
Yes Docu

Director: Maayan Schwartz
Production: Ayelet Kait, Amir Harel
Production Company: Lama Films
Israel 2022, 58 min, Hebrew and Arabic
Children who were brought up in a utopic social experiment in the only community in the world where Palestinians and Israelis chose to live together in co-existence.
“Oasis of peace” is a utopic dream that shattered into realty.

In Case You’re Still Around

Israel 2022, 67 min, Hebrew, English
Not everyone has the time to die. Yael did. Yael used her time to take a long, clear look at the fear of death. The film moves between then and now, as her daughter and partner continue their life.

Israel 2022, 73 min, Hebrew, English
In Kiryat Malachi, Los Angeles’ twin city, dreams were left behind. Yosef Huri is 60 years old: with mounting debts and looming local elections, he decides it’s time to fight for the town and his life.

Israel 2022, 65 min, Hebrew
The documentary MOSINZON sheds light on the unsolved mystery of the writer that truly re-embodied the phrase TRUTH IS STRANGER THAN FICTION.

The Camera of Doctor Morris

Israel 2022, 74 min, Hebrew and English
Everyone in Eilat, Israel’s southernmost city, knows Dr. Morris and crocodile Clarence who grew up in his garden. It turns out he left his wife and children hours
of personal documentation in 8 mm, which
re-tells the family’s bittersweet story.
Yes Docu

Israel / United States 2022, 94 min, Hebrew, Arabic and English
The story of the 1948 war and the silencing of graduate student Teddy Katz who exposed an alleged massacre that took place in the village of Tantura. A portrait of Israeli society and its inability to confront its founding myths.
HOT8

The 7 Years of Absalon

Israel 2022, 60 min, Hebrew, English and French
The story of Meir Eshel, who reinvented himself as an artist named “Absalon”, quickly rising to art-scene stardom. Years after his tragic death at the age of 28, Absalon’s younger brother Dani is tasked with selling his final work.
Yes Docu

The Artist’s Daughter, Oil on Canvas

Israel 2021, 60 min, Hebrew and Russian
She visits the self-portrait exhibition of a famous painter.
She is the artist’s daughter, but only few people know that.
As she stares at her father’s images, she feels a great sense of absence.
How does one film absence?
Yes Docu

Israel 2022, 90 min, Hebrew
When his life partner is hit with an illegal repossession order, attorney Barak Cohen launches an unprecedented public campaign against the heads of Israel’s banking industry.

Israel / United States 2022, 108 min, Hebrew, English and German,
On the sixtieth anniversary of the Eichmann trial, original recording reels of an interview conducted by Nazi journalist Sassen with Eichmann in Argentina are revealed. The tapes contradict his claims at the trial that he only fulfilled orders.

BEYOND THE SCREEN COMPETITION

Director: Tamar Yarom
Production: David Noy
Production Company: Cinemax Productions Ltd.
Israel 2022, 58 min, Hebrew
Seven women openly share their experiences of life in prostitution – from the initial lure, through trauma and their struggle to survive. They bravely challenge what is expected of them – to be ashamed and conceal themselves.
Yes Docu

Israel 2022, 72 min, Hebrew and English
An intimate maturation film in which Livi, a photography student, documents her four closest friends – young artists in downtown Haifa. Over the years, the instability in their lives raises questions about success, self-destruction, and the price of their dreams.

What’s With Me Lately?

Israel 2022, 65 min, Hebrew and English
Israeli cultural icon Rivka Michaeli travels to America.
Between the US where her family put down roots and the homeland she loves and hurts for – Rivka is walking a thin line, trying to find balance and hope within.
Yes Docu

Israel 2022, 54 min, Hebrew and Arabic
Two men in suits shoot at a frightened crowd in a Tel Aviv café. All caught on security cameras, Closed Circuit deconstructs this event to give insight into the complex Israeli reality and the lasting trauma caused to those involved.
Yes Docu

Director: Hanan Yehiely
Production: Hanan Yehiely
Israel 2022, 51 min, Hebrew and English
A young boy documents his aging grandmother as she grapples with her transition from independence to a nursing home. Captured through his innocent lens, this deeply relatable journey is full of laughter and loss.
Yes Docu

Israel 2022, 78 min, Hebrew and English
Ari Nagel, is a serial sperm donor and a father to more than a 100 children. Ari’s actions turn into a concerning habit, jeopardizing his relationship with his eldest son and his Jewish religious family.
Yes Docu

Israel / France 2022, 52 min, Arabic, English, Farsi, French, Greek, Moroccan and Spanish
Six people recall the languages that cradled their childhoods: Judeo-Spanish or Judeo-Arabic, and Judeo-Persian. Today, the languages themselves are dying but they left traces that still affect those who heard them as children.
FRANCE 3

Israel 2022, 37 min, Hebrew
After his brain stroke, more than 20 years ago, a daughter tries to make her father into a filmmaker and a parent again, while unknowingly documenting his last years through his own eyes.

Do You Want to Cross the Sea?

Israel / Canada 2022, 34 min, Hebrew, Arabic and English
A Darfurian asylum seeker embarks on a farewell journey from Israel to reunite with his wife and daughter in Canada. It is a journey of a man who is constantly on his way home.

Israel 2022, 54 min, Hebrew and English
Orr, a film student diagnosed with Autistic Spectrum Disorder, documents the bond between a father and his stepson, who suffers from a degenerative disease. The film raises questions about love and the right to life.

Israel 2021, 18 min, Hebrew
For a place that is meant for the dead, the animal cemetery seems to be full of life – and full of people with their own unique connection to their pet.

Director: Ayala Berger
Production: Ayala Berger
Production Company: The Photography Department, Bezalel Academy of Art and Design, Jerusalem.
Israel 2022, 20 min, Hebrew
The complex relationship between a single mother and her only daughter is revealed in a small hotel room in Tel Aviv, where they spend a weekend after a crisis.

Israel 2022, 50 min, Hebrew, English and Russian
Danni, a son of immigrants from Moscow, was ashamed of his family his whole life. 30 years after their “Aliyah” he interviews them and tries to learn their story. He reimagines their memories through animation.
Yes Docu

Requiem for a Whale

Director: Ido Weisman
Production: Netalie Braun
Production Company: The Steve Tisch School of Film and Television, Tel Aviv University
Israel 2022, 14 min, Hebrew
On a stormy night, a whale’s body washed ashore.
While the documentation of this rare event is shown, the voices of a few witnesses are heard, attempting to express the immense encounter with nature.

Israel 2022, 43 min, Hebrew
An intimate gaze at the lives of Shiran and Smadar, a cashier and a cleaner, employees of a supermarket located in Kiryat Shmonah, at beginning of COVID-19 in Israel. As simple desires become complex, the film uncovers two strong women and their passion for life.

Dor Zlekha Levy
Barik, a refugee from Darfur, tells the story of his escape, and recreates his traumatic journey through audiovisual means.

Dan Robert Lahiani
After arriving at the Clal building in Jerusalem for an osteopathic session, the artist’s quest for healing became entangled with the dilapidated and crumbling building.

Hadassa Goldvicht
The piece documents the historic building of the National Library as a decaying body with its obsolete machinery portrayed as channels of the subconscious of the Hebrew language.

Thalia Hoffman
The film documents the ecological systems that construct the Yatir forest and wishes to tell through it a political metaphor of the local Zionist existence.

Between the Negev and the Galilee

Yonatan Nevo
A portrait of the old central bus station area in Tel Aviv, exposing the visceral reality of life in the street and the humanity of the people inhabiting it.

Neta Moses
The loss of a beloved grandmother sets in motion some unexpected routes for reencounter.

The films’ synopses were written by the filmmakers, and Docaviv festival bears no responsibility for their content.