Home videos shot during his childhood send director Shauly Melamed on a downward spiral, inspiring a search for other LGBTQ adults who documented themselves during puberty. Shauly finds many such individuals who, in their youth, exposed their non-conforming identities without understanding the secrets the camera beheld. Tom, transgender, grew up in the Ultra-Orthodox town of Safed and unwittingly documented his journey of self-discovery; Betty, born to Iranian immigrants, obsessively filmed her intimate relationships with girlfriends; Rumia found her roots in drag as her mother came out of the closet; Shauly explored his own homosexuality in the aftermath of his father’s sudden death. Through watching their childhood films, the four LGBTQ adults are forced to confront the most formative people and experiences from their past. 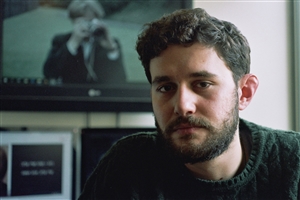 Shauly Melamed holds a BFA from the Steve Tisch School for Film and TV.
He is a director and an editor.He edited the known documentary feature film “Spotting Yossi”, and in 2021 he edited the film “Queen Shoshana” and his first fiction film “Concerned Citizen” that premiered at 2022 Berlinale.