There are no more places in the Middle East where war hasn’t left its traces, so when the camera moves between Syria, Iraq, and Kurdistan, it’s hard to guess where it is and when it had crossed the border. Filmmaker Gianfranco Rosi (director of award-winning documentary Fire at Sea) spent three years filming in the region. He crossed many a border, and always, on both sides, he met the same people: men and women trying to live their lives amid the ceaseless violence of civil wars, military coups, occupations, and attacks. All of his subjects have been shaped and scarred by war, but Rosi stitches these dark materials together into a beautifully poetic film punctuated by moments of hope: he meets children, mothers, soldiers, and psychiatric patients—and finds that they all share the same human essence.

With the support of the Italian Institute of Culture. 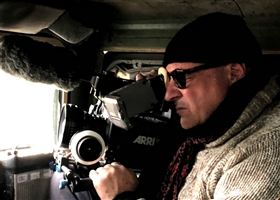 Gianfranco Rosi, born in Asmara, in Eritrea, with Italian and American nationality, after attending university in Italy, moves to New York and graduates from the New York University Film School in 1985.
Following a journey to India in 1993, he produces and directs Boatman, about a boatman on the banks of the Ganges, which he shows with success at various international festivals including the Sundance Film Festival, the Locarno Film Festival, and the Toronto International Film Festival. After the short film Afterwords, that was shown at the 57th Venice International film Festival, in 2008 in Slab City, California, he shoots the documentary Below Sea Level about community of homeless people who live on a desert plain 40 meters below sea level: the film wins Best Film in the Horizons section of the Venice International Festival and at Doc/It. It also takes the Grand Prix, the Prix des Jeunes al Cinéma du Réel, the prize for best film at the One World Film Festival in Prague, the Vittorio De Seta Prize at Bif&st 2009 and is nominated for Best Documentary at the European Film Awards 2009. In 2010 he shoots El Sicario – Room 164, a film interview from a story by Charles Bowden about a hitman on the run from Mexican drug cartels. The film wins the Fipresci Award at the Venezia Film International Festival, the Doc/It prize for Best Documentary of the Year, Best Film at DocLisboa in 2010 and at Doc Aviv in 2011.
In 2013 he wins the Golden Lion at Venice with Sacro GRA, the film where he tells the story of hitherto unseen humanity that lives around the Grande Raccordo Anulare (the ring road highway) that circles Rome. It is the first time a documentary is awarded the Golden Lion. In 2016, Rosi wins the Golden Bear for Best Film at the Berlin International Festival with Fuocoammare, stories from the island of Lampedusa, about its inhabitants, fishermen and migrants. While in Italy it wins the Italian Golden Globe, receives two nomination for the David of Donatello Awards and wins a Nastro d’Argento, Fire at Sea (its international title) will bring Lampedusa, an island that is a symbol of migration, to the whole world at festivals and in movie theaters, gaining further recognition with a win at the European Film Awards and a nomination for the Oscar for Best Documentary.