After two and a half years in captivity, Imad, his little brother Idan, and their mother Ghazala are released into a displaced persons’ camp in Kurdistan. Healing from the trauma is hard for all of them, but it seems Imad is having a particularly tough time. Not yet five, he has already spent over half his life enduring terror, abuse, and “training” meant to make him heartless. Speaking only Arabic, he cannot communicate with his family, and the only means of expression at his disposal is violence. He hits and spits, and his only game is pretending to be an ISIS fighter who shoots, blows things up, and kills. This poignant film follows him as he takes hesitant steps on the hard road to recovery, guided and held by his mother, his grandmother, and an incredibly supportive therapist. 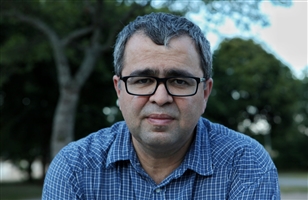 Zahavi Sanjavi was born in 1967 in Arbil, Kurdistan, Iraq. Since 1990 he lives in Sweden. Zahavi pursued his studies in the field of scriptwriting and filmmaking at All-Russian State University of Cinematography in Moscow. Within nine years he worked for TV in Iraqi Kurdistan. Zahavi works in Sweden on his documentary and feature films as director, scriptwriter and producer.